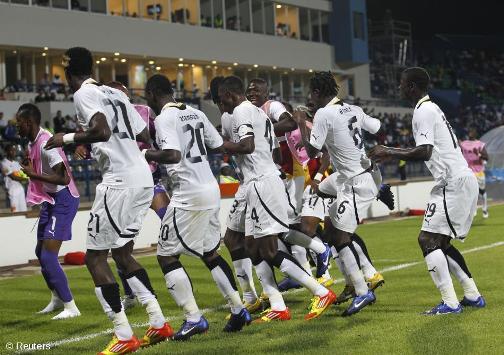 Ghana national football team kept themselves in contention to reach a third consecutive World Cup after defeating Zambia 2-1 to reach the final round of African qualifying.
The victory takes the Black Stars to the play-offs, where they will play a two-leg play-off for a place at next year’s final in Brazil.
Kwesi Appiah’s side had lost their last two meetings against the Chipolopolo but their win at the Baba Yara Stadium rounded up a busy campaign which produced five wins from six matches with Zambia, the only side to have beaten them in Ndola.
The two-time World Cup finalist took the lead at the packed stadium when captain Asamoah Gyan lobbed the ball into six-yard box for Warris to nod past Kennedy Mweene for the opener in the 17th minute.
Ghana looked the better side of the first half but failed to really test Mweene though Zambia occasionally riled the Ghana backline.
The African qualifiers for the 2014 FIFA World Cup Brazil was billed to go down to the final set of matches and it did as back from recess, the Chipolopolo ringed the changes to get themselves back into the game.
Ghana’s bench made two quick changes, pulling out Rabiu Mohammed and Mubarak Wakaso for Michael Essien and Christian Atsu.
If the introduction of Essien, who last played for the Black Stars in 2010 was deafening, then the second goal capped the day.
Asamoah let go a shot from 30 metres in the 62nd minute into the left corner which a sprawling Mweene was left with no chance to keep out.
Despite the sudden domination, Zambia pulled a goal back when an unmarked Sinkala connected from a corner.
The Black Stars bench threw in their last card with Emmanuel Agyemang Badu taking over Gyan as Ghana protected their lead to cruise into the next round.
Only the ten group winners advance to the third round of preliminaries, and the draw for the final round of home-and-away matches will be made in Cairo on 16 September.
Starting line-up: Fatau Dauda, Daniel Opare, Harrison Afful, John Boye, Jonathan Mensah, Rabiu Mohammed/Michael Essien, Andre Ayew, Kwadwo Asamoah, Abdul Majeed Waris, Asamoah Gyan/Emmanuel Agyemang Badu, Mubarak Wakaso/Christian Atsu