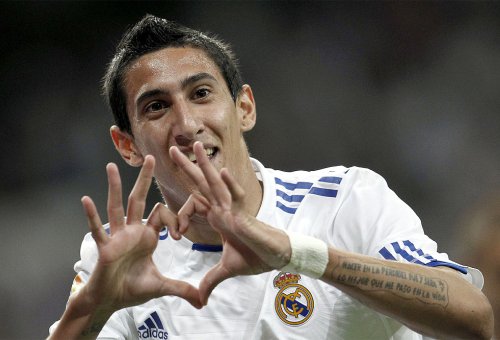 The imminent arrival of Gareth Bale to Real Madrid will trigger big changes at the Spanish Football Club.
English Premier League Club Arsenal FC is said to already have made its move. First it was a speculated offer for forward Karim Benzema which was rejected by representative comments this weekend. Now the news from Spanish Sports papers is a 30M€ initial offer for Argentine International Angel Di Maria.

Weeks back the talk around town was that Di Maria saw himself more in than out at Real Madrid. However, Real Madrid is said to be looking at the Arsenal FC offer with positive eyes & that it is an inteesting option. The only difficulty is the player, Angel Di Maria, who has just one week to think about it as the transfer window shuts the 2nd of September.
Staying at Real Madrid another midfielder who anticipates that Gareth Bale arrival will have a negative impact on his playing chances is German International Mesut Ozil who is said to be thinking seriously a move. Some local Football observers claim that he could be soliciting that the Club facilitate his exit. A rumour is currently doing the rounds that Manchester United could be in the shadows.