Bale is now a Real Madrid player. President Florentino Perez and members  accompanied the new player and welcomed him to his new home.

After passing a successfully  medical examination , Bale went to the Santiago Bernabeu Stadium to sign the contract that means he will be with Real Madrid for the next six seasons. A large representation from the Whites’ board waited for him in the boardroom, with Florentino Perez at the helm, to welcome him and present him with a replica of the stadium, a watch, the pen with which he signed his contract and a Real Madrid shirt, carrying his name, the number 11 and the date of his unveiling as a Real Madrid player under the badge. 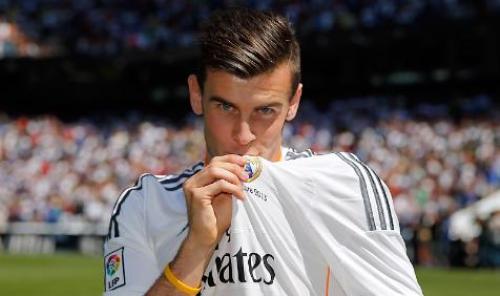 After that Gareth Bale set foot on the Santiago Bernabeu turf for the first time in a Real Madrid shirt. Following the ceremony in which he was unveiled as Real Madrid player in the Directors’ Box, the Welshman changed into his new kit, bearing the number 11. Then he went out onto the turf, where he posed for the media and even took shoots at goal. More than 20000 Real Madrid fans were in attendance to welcome him. The player returned the affection they showed him by kicking footballs in the stands.