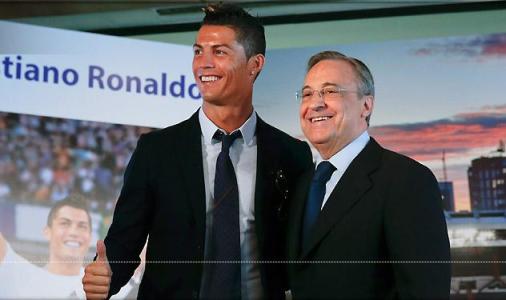 Cristiano Ronaldo has signed a new deal with Real Madrid CF by agreeing terms on a three-year contrat that ties him to the Santiago Bernabéu until June 2018.
Currently in his fifth season with the Merengues since completing what was then a world-record €94m transfer from Manchester united FC in 2009, the 28-year-old player previous agreement Real Madrid was due to expire in 2015.
Speaking at a press conference to announce the deal, the Portuguese stricker  said:

” This is a very special day for me and I am extremely happy. I am grateful to the president [of this club] and to the fans who have always been there for me. It could well be that I’ll be here until the end of my career and that says it all. It’s a privilege and this moment feels like the first day I arrived. I am going to continue working hard and giving everything that I have for this team….I am happy, I hope to retire in Real Madrid”

Ronaldo has scored 204 goals in 203 games for Real Madrid; an incomparable figure. However, he still has many more to score and many more titles to win here….We’ve made the dream of all madridistas come true. Cristiano is and will eternally be madridista