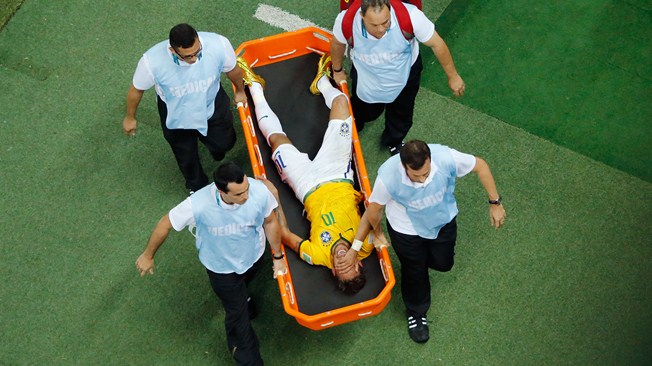 Brazil star Neymar was ruled out of the FIFA World Cup™ on Friday due to a back injury, team doctor Rodrigo Lasmar said.

Lasmar told reporters Neymar suffered a fracture in the third verterbra of his back during Brazil vs Colombia with 2-1 quarter-final victory over Colombia.

The hosts and tournament favourites set up a semi-final clash with Germany by disposing of los Cafeteros  at the Estadio Castelao.

Neymar was in tears after taking a knee to the back from Colombia’s Juan Zuniga.
Brazil doctor Rodrigo Lasmar confirming he has sustained a fractured vertebra that will end his World Cup.

“It’s not serious in the sense that it doesn’t need surgery, but he’ll need to immobilise it to recover,” Lasmar said. “Unfortunately, he’s not going to be able to play.”

Lasmar expects the recovery time to be at least a few weeks, ruling Neymar out of Tuesday’s semi-final against Germany and the final, should Brazil get there, on 13 July.

The forward was seen leaving the Estadio Castelao on a drip and, after initial analysis at the stadium, was taken to a local clinic.

Neymar was crying in pain and his absence will be a huge blow to Brazil, who will also be missing captain Silva for their semi-final with Germany through suspension.