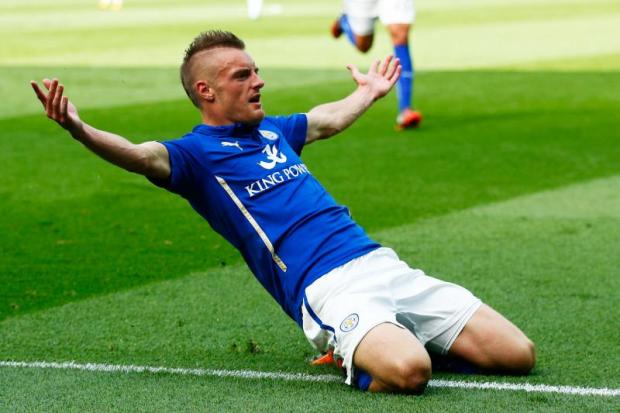 Jamie Vardy Could Be Having A Party: Some Great Premier League Stats

Prior to the 2015/16 season, Jamie Vardy was a footballer hitherto unknown to most football fans around the globe. He had plied his trade in the lower leagues of English football for a number of ears, before finally getting his shot at the big time aged 26 following a £1 million move to Leicester City.

And now, three years later, Vardy stands on the cusp of creating history: he is just one goal against Newcastle United (November 21) away from equalling Ruud Van Nistelrooy’s 12 year old record of scoring in ten consecutive Premier League matches.

That got us thinking about goal records as a whole; and we did a bit of digging to find some of the most incredible feats of goalscoring in the beautiful game’s history.

In a feat that is likely to remain unrivalled for years to come (only Wayne Rooney is a likely candidate to beat it), Ryan Giggs hold the record scoring in the most consecutive Premier League seasons: incredibly, from 1992/93 to 2012/13.

This run took Giggs quite literally from a boy to a man: he netted his first goal for Manchester United aged 19, and his last at 39. Wayne Rooney will need to score a goal in the Premier League aged 37 or older to better that record.

The record for the most number of goals scored in a Premier League season is 31; a feat achieved by Alan Shearer, Luis Suarez and Cristiano Ronaldo. That’s a goal every 0.82 games – which is hugely impressive at the top level of English football.

That is still some way behind Lionel Messi’s best in La Liga however: the diminutive Argentine netted a whopping 50 times in 37 appearances in the 2011/12 season.

If the Hat Fits

Alan Shearer bagged five hat-tricks in a single season for Blackburn Rovers in 1995/96; a record that still stands a decade later. As if that wasn’t enough, he once bagged five in a single game for Newcastle United against Sheffield Wednesday in 1999. Not to be outdone, Jermain Defoe scored five in a single half against Wigan Athletic for Tottenham in a 9-1 thrashing in 2009.

The fastest hat-trick in Premier League history was scored by Southampton’s Saido Mane against Aston Villa in May this year. He took just 2 mins, 56 seconds to bag his treble – the same length of time it takes many of us to get out of bed in the morning.

Master of their Own Downfall

Most players would love to have the opportunity to score ten Premier League goals; although for Richard Dunne the dream soon became a nightmare. The well-travelled defender notched ten own goals during his lengthy career in English football’s top flight.

Equally as impressive is Martin Skrtel’s four own goals in a single season (2013/14). That is more than he has scored at the ‘right end’ in eight of his nine seasons at Liverpool.

There’s a reason why the good folk of Norwich are sick of the sight of Luis Suarez: as a Liverpool player, the Uruguayan netted three hat-tricks against the East Anglian club.

All in all, Suarez bagged 12 goals in six games against the Canaries, which is a record for a single player against one club. There must be something in the water round Norwich way….

Of course, Suarez was no stranger to breaking records in his time at Liverpool. In December 2013, for example, he netted ten goals in a single calendar month – the first (and only) Premier League player to achieve the feat.

He gave the passionate fans at Anfield the one thing they truly love for Christmas: wins.

And at the Other End….

Goalscorers take all the plaudits but what about those plucky goalkeepers who do so much to win games for their respective teams?

Take Edwin Van Der Sar, for example. The Dutch legend enjoyed a fantastic spell at Manchester United, and in the 2008/09 campaign he went 14 matches (that’s 1,311 minutes) without conceding a goal. That’s a long time.

Five goalkeepers have scored in Premier League matches – either by pumping the ball down field from a goal kick or by scrambling home a late winner/equaliser from a set piece. They are Brad Friedel, Paul Robinson, Tim Howard, Asmir Begovic and Peter Schmeichel, whose son Kasper (also a goalkeeper) scored for Leicester City in a Championship game. That family certainly knows where the net is.

Craig Simpkin from the Bet Blog of Betadvisor