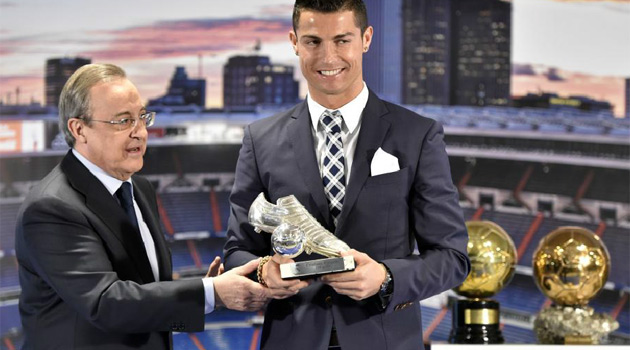 Cristiano Ronaldo admits he “never thought” he would one day overtake Raul Gonzalez as Real Madrid’s all-time top goalscorer after being honoured on Friday.

Ronaldo replaced Raul as record marksman following his brace against Malmo on Wednesday, which took him to 324 goals, despite reservations over whether his second strike was indeed his 324th, and he acknowledged his feat with humility.

“I never thought when I wore this shirt for the first time that I’d become the top scorer for the world’s biggest club,” he said.

“I’m very happy to have beaten my friend Raul and the late, great [Alfredo] Di Stefano.

“I’d like to thank all my colleagues because without them my feat wouldn’t have been possible.

“I’d also like to thank] the Coaches I’ve had, from Manuel Pellegrini to Jose Mourinho and Carlo Ancelotti and Rafa Benitez, the Real Madrid Foundation, the physios.

“I’d like to thank the media, with whom I’ve not been very nice to, but it’s my way of being me.

“Finally, I’d like to thank my agent, mother and President for this beautiful act. Thank you everyone. Hala Madrid!”