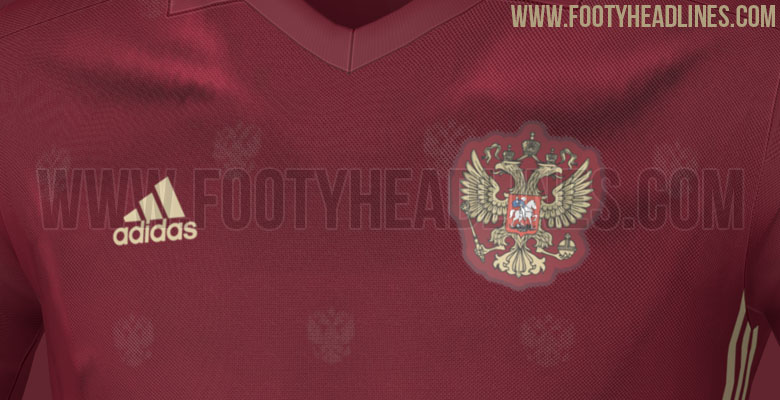 The new Russia Euro 2016 Home Kit features Adidas’ new 3 Stripes placement while combining a maroon base with golden details in a classy design. Set to be released in November 2015, the new Russia 2016 Home and Away Kits are made by long-term kit supplier Adidas and will be used at the UEFA Euro 2016 in France. 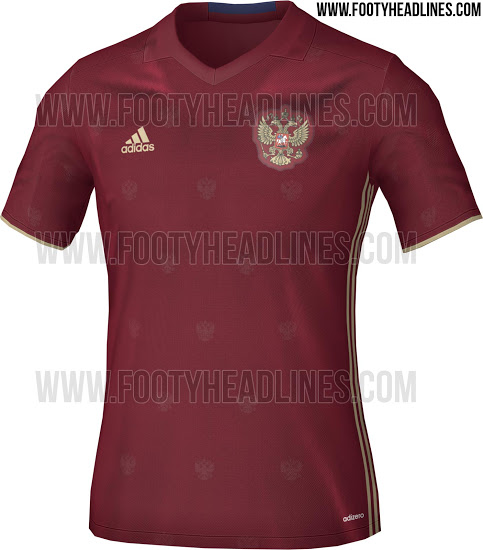 The new Adidas Russia 2016 Home Jersey is mainly dark red and comes with an all-over print pattern of the Russian Football Union badge. Starting 2016, Adidas will change the position of the iconic 3 Stripes from the sleeves to the sides of the jersey, as it is the case with the Russia 2016 Kit as well as with the Germany Euro 2016 Kit.

An engineered v-collar, based on the Adidas Condivo 16 Jersey template, is used for the new Adidas Russia 2016 Home Shirt, which features golden trim on the sleeve cuffs.

The shorts and socks of the new Russia 2016 Home Kit will be burgundy with dark gold accents, just as the Russia 2016 Shirt.

While the new Russia Home Kit follows the designs of the last few Russia kits closely, the new Russia Euro 2016 Away Kit will be much less traditional, combining a white shirt with a unique graphic pattern, blue shorts and red socks.