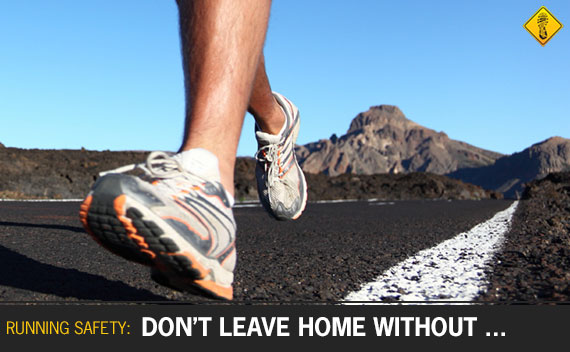 Whether you’re training for a marathon or running a recreational route, running out on the open road can be an enjoyable way to get exercise. Unfortunately, running on the road has potential dangers if you don’t pay close attention to your surroundings. Here are some road running safety tips you should keep in mind before you go on your next run.

During the fall and winter months, shorter days mean less daylight for running outside. If you usually run after work, you should be prepared for running in the dark, which means wearing light colored clothing. It’s important to wear bright, reflective clothing so cars, bikes, and other runners can see you. If you can be seen by others, you are less likely to get run over.

You can check sporting good stores for bright or reflective outer layer clothing. While this type of clothing may not be the most fashionable, it’s worth wearing for your safety. If you don’t want to spend the money on a reflective jacket, you can purchase a reflective vest that construction workers wear.

If you run with loud music blaring your your ears, you won’t be able to hear if a car comes up behind you and it will slow your reaction time. If you run with headphones, especially if you’re by yourself, you are also more vulnerable to an attacker. If you absolutely can’t run without music, keep just one headphone in or stick to running on the treadmill.

3. Bring Your Identification And Cell Phone

Both of these will be very valuable if you find yourself lost, injured, or in danger. Also make it a point to let someone know you’re about to go on a run and when you plan on returning.

Try to run on sidewalks and paths in well-lit areas. This will help prevent traffic accidents, especially if you’re running at dawn or dusk. If you must run on the road, face oncoming traffic so you can clearly see what’s ahead of you and have enough time to react.

If possible, run with someone else. Two people are harder to attack and aren’t as vulnerable as someone running alone. If you don’t have a running partner, take your dog on your run.

Just because you aren’t in a vehicle doesn’t mean you can act irresponsibly and forget the rules of the road. Look both ways before crossing any street. When waiting at a stop sign, wait for drivers to wave you through. If you’re running in a neighborhood, watch out for cars backing out of driveways and don’t jaywalk.

Other Hazards You Should Avoid:

These suggestions are extremely important to consider when running after dark. However, you can use these tips to stay safe no matter what time of the day you go running.

Trisha Banks is a blogger for Loewy Law Firm in Austin, Texas. Trisha runs outdoors often and wants to stay safe while running.