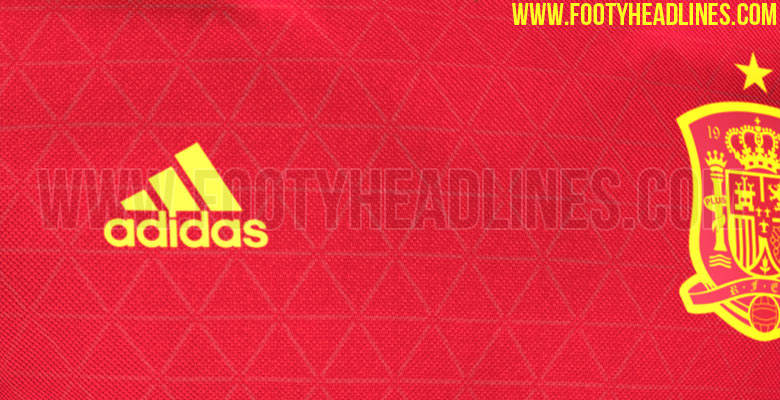 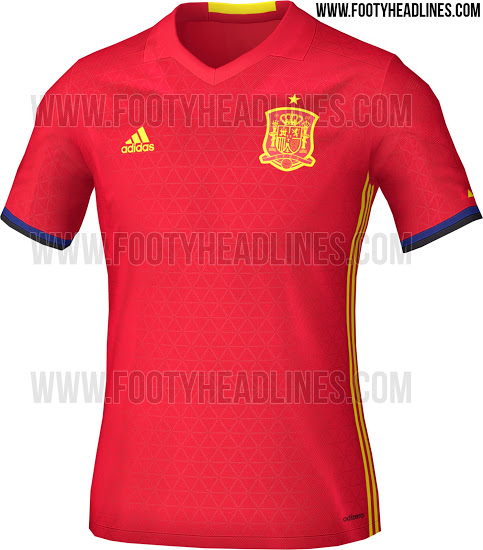 The new Spain Euro 2016 Home Kit combines the famous colors of La Roja after Spain’s 2014 World Cup Kit introduced a striking color gradient design with two tones of red. On the front, the back and the sleeves of the new Spain Euro 2016 Shirt is a subtle triangular all-over graphic print.

Most remarkably, the Three Stripes are not placed on the sleeves but on the side of Spain’s Euro 2016 Kit in the same way used for all other Adidas Euro 2016 Kits.

The sleeve cuffs of the new Spain Kit for the tournament in France are blue and black, and the famous Spanish flag is placed on the sleeve cuffs created using three triangles to complement the consistent design concept.

Adidas combines the new Spain Euro 2016 Home Kit with a modern v-collar, based on the Adidas Condivo 2016-17 Teamwear Shirt.

The new Spain Euro 2016 Kit will be combined with royal blue shorts and dark navy socks. It’s similar to the traditional combination that was used until the 1994 World Cup, and contrasts with the unusual all-red Spain 2014 World Cup Kit.