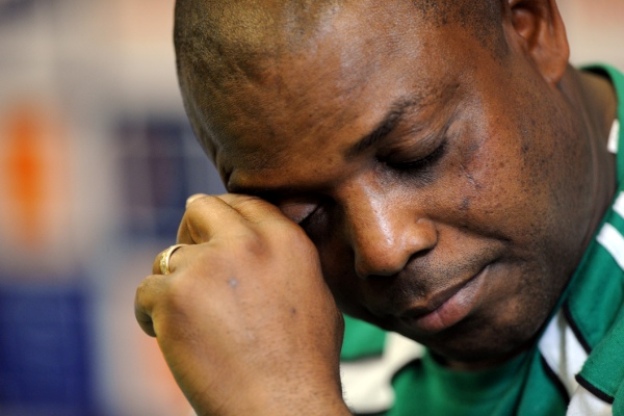 NFF have relieved Super Eagles coach Stephen Keshi and his assistants Daniel Amokachi and Ike Shorunmu of their duties following Nigeria’s unimpressive run in the 2015 African Cup of Nations qualifiers.

The Eagles are third in the Group A of the AFCON 2015 qualification table with just four points after three games. The African champions lost to Congo and Sudan and managed to hold South Africa to a barren draw.

The Executive Committee of the NFF rose from its meeting which started late on Wednesday, immediately after the 3-1 win over Sudan, and ended early hours of Thursday morning and opted to remove Keshi and appoint Shuaibu Amodu as the interim coach of the national team.

The one-time BCC Lions coach who qualified Nigeria to its second World Cup appearance in 2002 and took the team to that year’s African Cup of Nations finals in Mali will be assisted by Salisu Yususf, Gbenga Ogunbote and goalkeeper trainerAlloy Agu. The trio will be in charge of the national team pending the appointment of a foreign manager on a permanent basis.

Keshi, Amokachi and Shorounmu will however proceed on a coaching course at the expense of the Nigeria Football Federation. Their entitlements, according to the NFF, will be paid within the next two weeks.

The team’s Secretary, Dayo Enebi, however retained his job.