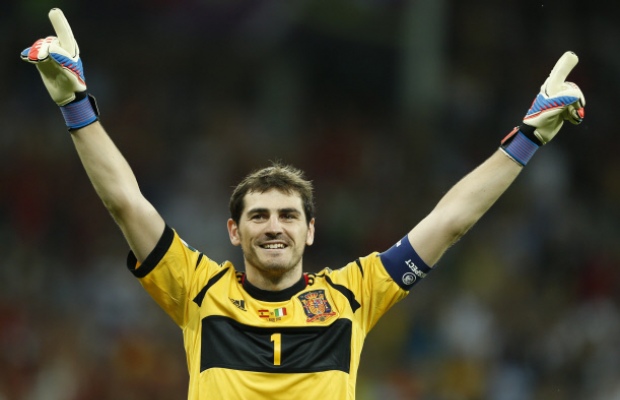 There have been two names that are linked with great goalkeeping in La Liga concerning Spanish football, and piquing the interest of those who avidly follow the sport, during the last decade, since Sky has brought the sport to our regular TV screens. Two major teams have produced the two giants of goalkeeping – Real Madrid and Barcelona have produced Iker Casillas and Victor Valdes.

Valdes, who is a 10 year starter for Barcelona, has been a strong factor in over 500 games for the Catalan club, he has been a real force for the team, but the more highly acclaimed has always been Casillas, who has caught the imagination and the love of the crowds. His spectacular play and his display of intensity have had much to do with his popularity and consistent productivity.

Casillas who is now aged 32, has an incredible track record with more achievements than any other goalkeeper in the modern game of football. With five La Liga titles, one Copa Del Rey and 2 Champions Cup medals at domestic level has put him at the very top. But add to all of this with the World Cup Victory as the team captain for Spain along with two European Championships, puts his results far above anything that could be imagined.

Casillas began his triumphant journey at a young age. Making his full entry into the football world at age 18, during the 1998-99 season he replaced the veteran German Bobo Illgner as number one at the Bernabeu. He was the youngest goalkeeper to win the Champions League the next season when Madrid overcame Valencia in the final match, four days after Casillas turned 19.

He missed very few matches over the next twelve seasons and he was given a contract for life in 2008 when he inked a nine-year pact that linked him to the club until 2017. This contract will be extended if he can play in 30 competitive games in the final year of that contract. If any other team wants to steal Casillas, and there have been many who have tried in the last several years, there is a buy out feature in the contract for the amount of 113,000,000 pounds.

Records For The Club

Casillas in now ranked second in the number of game appearances for Madrid, with over 650 games played. Raul is ahead of him with 741 games. At the age of 27 in 2009 he slipped past Francisco “Paco” Buyo’s record of 454 games and is on his way to becoming Madrid’s first player to pass 1,000 games for a club record.

Certainly with 13 more years to play one would think that he would break record after record on his journey to immortal fame, but there was one thing that happened that he didn’t count on, nor did anyone else. That was the arrival of “the special one” – Jose Mourinho. All was in good favor at first, but then in December 2012, Mourinho did an unthinkable change and put Casillas on the bench. This was a shock to everyone and became the talk of Spain and also left the entire world of football in total shock.

Almost a year later, Casillas is still not back in good graces, and even though Mourinho has left the team, the new Madrid boss, Carlo Ancelotti still favors Diego Lopez as his number one keeper. Casillas still emphasizes his love for the club and his desire to win more trophies, but perhaps he will move elsewhere to revitalize his career. He has won more trophies and caps than anyone in the sport for Spain and if he desires to be able to play at that level again, he must at least be playing as a regular on the first team.

Between The Sticks Superstars

Before Casillas became the icon of the sport as far as keepers were concerned there were other keepers who were known as top performers for Real Madrid. Legends such as Paco Buyo and Miguel Angel, Bobo Illgner and Santiago Canizares are forever enshrined as being among the top of the ranks.

Illgner was the standout in the game between Germany and England in the 1990 semi-final match in which Gazza’s tears and the most tense shoot-out occurred. It was Illgner that kept his nerve and made the fantastic save that broke the hearts of the English. It also earned Stuart Pierce a pizza contract and finalized Germany’s trip to the final, rather than England. It was that final that found Illgner’s team going ahead of Maradona and his Argentine compatriots.

The four hundred plus games for Valencia is what propels the memories of Santiago Canizares, as the product of Real Madrid, yet remembering that he came from the Real Madrid youth and who spent 8 years with Los Meringues. He is remembered for his brightly bleached blond hair contrasting with his orange keeper’s jersey. He was regarded as one of the best keepers in the world which was an opinion that was shared by Manchester United legend Peter Schmeichel.

Amy Rice writes for www.spanishkicks.com when not writing, I enjoy spending time with my daughter, reading, lifting free weights and gardening.
View all posts by Amy Rice →