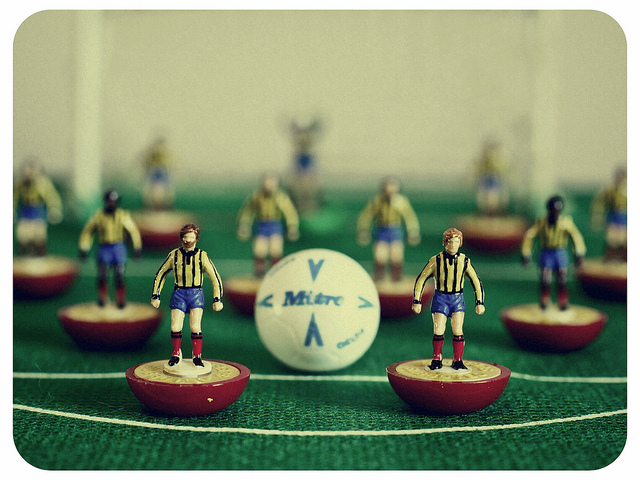 Many of us think that we know everything there is to know about the beautiful game, but you’re more than likely wrong. We’ve delved deep to find some incredible football facts from years gone by. Prepare to be amazed…..maybe!

1 – In 1998, a Second Division Romanian midfielder, by the name of Ion Radu, was sold for around 500kg of prime pork. That was equivalent to approximately £1,750 at the time, but come on; pork?!

2 – The highest scoring game in professional football was back in 1855 when Arbroath spanked Bon with a whopping 36-0 win. This is a record they’re still very proud of today.

3 – A USA training assistant was knocked out by chloroform on the pitch during the 1930 World Cup semi-final against Argentina. Whilst attending to a player injury, the training assistant dropped and smashed his bottle of chloroform and was overcome by the fumes. What he originally had planned for that chloroform, we can only imagine….

4 – Referee Martin Sylvester sent himself off during a match for punching a player. During a game in the Andover and District Sunday League. Sometimes players probably do deserve a slp for their behaviour, but the referee really shouldn’t play the roles of judge, jury and executioner!

5 – We all know that Scotland gets more than its fair share of bad weather, but in 1979, this really did begin to interfere with Scottish football. A 1979 Scottish Cup tie between Falkirk and Inverness Thistle was postponed a grand total of 29 times due to bad weather.

6 – When Chelsea met Charlton in a 1937, fog descended onto the pitch, making visibility so poor that the game had to be abandoned. However, Charlton goalkeeper, Sam Bartram, was unaware that the game had been called off, and because he could barely see a few feet in front of his goal line, he remained in his goal for several minutes after the rest of the players had left the field. A polite police officer eventually let him know that he could head back to the changing rooms.

7 – Sticking on the fog theme, during a game bewteen Dynamo Moscow and Aresenal in 1945, heavy fog once again disrupted play. However, this time the referee decided to play on. However, under the blanket of fog, a great deal of foul-play went undetected. An Arsenal player who’d been sent of for fighting came back on the pitch for the remainder of the game. The Russian’s also took full advantage of the situation and were reported to have as many as 15 players on the field at one time. Then to top off the chaos, the Arsenal keeper ran into the goal post and knocked himself out. Ah, the beautiful game.

8 – In 1995 a Manchester City fan was banned from attending matches because his choice of celebration was to swing a dead birds around his head. As you can imagine, this didn’t go down too well with the other fans or the authorities.

9 – Macclesfield’s mascot was sent off for making offensive gestures during a match against Lincoln City, when players began to brawl.

10 – Ready to have your mind blown? Well, it is thought that football was actually invented in China. It was originally called ‘cuju’ and some history books date the game back as long ago as 476BC.

Thanks to Rob from Discount Football Kits for digging deep and finding these awesome facts. Jim is a huge footy fan and loves to write for a number of sports blogs.

Posts from guest bloggers
View all posts by Sat Sessou →