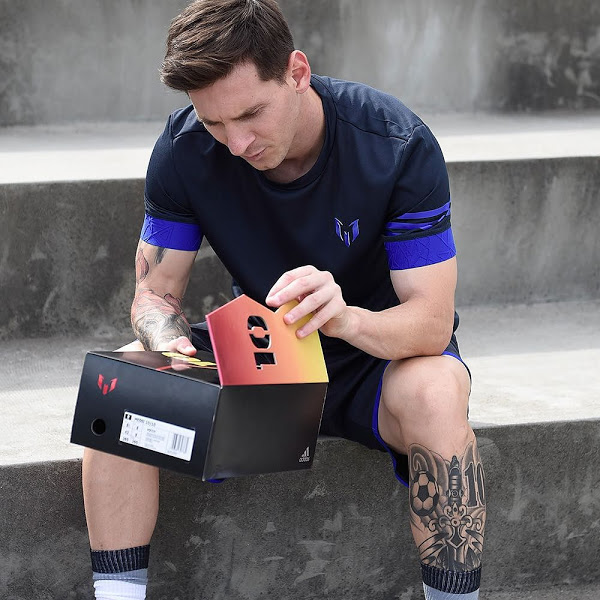 Adidas only shared one photo showing Leo Messi holding an iconic box with a bold 10 / 10 writing on top, together with a rather cryptic text.

A day and an exclusive boot to celebrate Leo Messi’s perfection.
10/10…#BeTheDifference #LimitedCollection

Therefore, the bits of information we have regarding the design, features and look of the Adidas Messi 10/10 Cleats are little.

For one, the box is black / red / yellow, most likely informed by the colors of the actual boots. Additionally, the fact that the Adidas Messi 10/10 Boots are part of the Limited Collection could indicate that they aren’t just a regular color update. It seems safe to assume that we’ll get to see at least a very unique and special design, if not even a wholly different boot, Primeknit anyone?

The title, ‘Adidas Messi 10/10’, as well as the image description above imply that the upcoming Adidas Messi Limited Collection Boots are planned as some sort of celebration of Leo Messi’s impressive 2014-15 season. The FC Barcelona superstar didn’t only win the treble, but also shone on an individual level, with his Champions League semi-final performance against Bayern Munich standing out particularly.

In other news, Leo Messi is only estimated to make his return for Barcelona in late November which means we are unlikely to witness the special Adidas Messi 10/10 Boots on his feet in a competitive match.

The Limited Collection was introduced by Adidas earlier this year and has since overseen the releases of the Adidas Primeknit 2.0 and, most recently, the all-new Adidas Ace 15+ and X 15+ Primeknit Cleats.

What are you expecting the Adidas Messi 10/10 Cleats to look like? Let us know in the comments below, and stay tuned for updates as we get them.