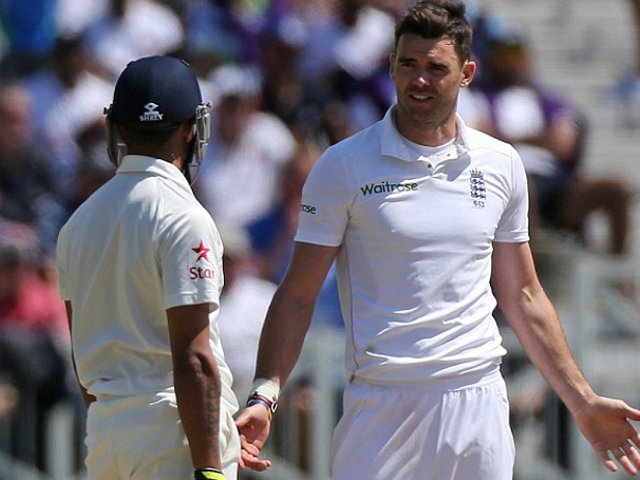 The second test of the ongoing five- match Investec series between India and England is set to underway from Thursday. All eyes will be on the body language of players of both teams as they will be coming out to play against the backdrop of last match’s altercation between Jadeja and Anderson. It is to be mentioned here that ICC (International Cricket Counsel) has already charged Anderson of pushing and abusing Ravindra Jadeja and a four match ban is likely to be slapped on him in coming days.

The incident took place (allegedly) during the lunch session on the second day of the first test match when players had left the field for lunch.

The England’s star pacer is charged with level 3 offense under the ICC’s code of conduct. The offense under this category includes ‘threat to assault any player or other person during an international match’, ‘bringing the game into disrepute’, or ‘any conduct which is contrary to the spirit of the game’. The charges have been laid by the manager of Indian cricket team – Sunil Dev. The case against Anderson was registered by ICC’s legal head after reviewing the report.

For a first offense of level 3 or 4, a player can be sanctioned for up to 8 match points. While a one-day match is equivalent to one match point, a test match counts for 2 match points. Thus, in such a scenario, Anderson can be suspended for up to 8 one day’s or four test matches after being found guilty. However, if his offense finds a place in level 1 or 2 under ICC’s code of conduct, he may be fined accordingly, while not facing suspension from any match.

If the recent move of England and Wales Cricket Board of issuing a statement in total support of the Anderson is any indication, the relation between BCCI and its counterpart is likely to be put under strain in coming days. The ECB has further added fuel to the fire by issuing warning that if any action will be taken against the their pacer by ICC, the board would report Indian all-rounder Jadeja for breaching ICCs code of conduct.

As the ICC’s legal body is likely to take a few weeks to confirmed the charges against Jadeja and Anderson, both of the players are free to be a part of playing 11 during the second test which is scheduled to be played from 17th to 21st July. However, if the global governing body announces the punishment for alleged violation of code of conduct within next week, Anderson may miss the rest of the three matches of this series.

Meanwhile, some efforts have been taken from both sides to cool-off the matter, as this issue bears the potential of souring the financial ties between two of the most powerful and influential members of ICC

For more sports news and cricket updates in hindi logon to patrika.com