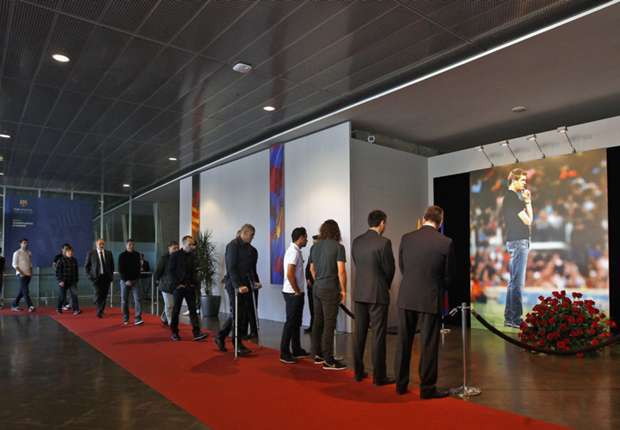 Barcelona players have visited the area set aside by the club for tributes to former coach Tito Vilanova, who died on Friday.

Vilanova, who served as assistant to Pep Guardiola before taking charge of first-team affairs at Camp Nou, passed away at the age of 45 following a lengthy battle with throat cancer.

After succeeding Guardiola for the 2012-13 season, Vilanova guided the club to the league title with a club-record haul of 100 points.

However, his sole campaign in charge was interrupted by illness and he was forced to step down last July.

The club confirmed on Friday that Vilanova had passed away, with Barcelona’s playing squad and coaching staff the first visitors to a space at the club’s stadium set aside for tributes.

“After signing the book of condolence, the whole squad moved to face a large photo of Tito Vilanova, where they dedicated a few moments of pensive silence,” Barca detailed on their official website.

“It was a tough experience for many of the squad, who were visibly moved as they recalled the man who had coached many of them from his days as a youth coach, then as assistant to Pep Guardiola and finally as first team manager.”

Captain Carles Puyol said: “From here we send a lot of strength to his family and friends.”

The doors to the area at Camp Nou are now opened for the general public to pay their respects.