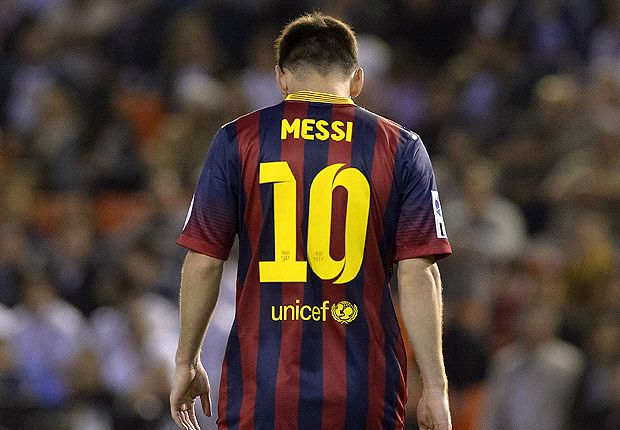 The current contractual stand-off between Barcelona and Lionel Messi is only likely to end one way – with the top scorer signing a mammoth new deal which will be the richest in football. There is a long way to go, however, on that front and the Catalans might well consider their options despite the transfer ban looming.

The club is believed to be offering Messi a five-year contract worth €200 million. That equates to €40m per season. Messi is alleged to be unhappy at the terms offered. He feels he is worth more than that. With his current deal expiring in 2018, his transfer value will never be higher.

Last summer Barca legend Johan Cruyff suggested that Messi should be sold in order to accommodate Neymar in the line-up. He also accurately predicted that Barca would suffer from playing the two together.
There have been rumors in the Spanish press this week that Barcelona, is considering the possibility of a Messi sale over the summer. It would be the costliest transfer in the history of football.
And maybe Messi is in need of a fresh challenge himself. At Barcelona, he has amassed every individual honour available, smashed every record in the book. On a sporting level, there is not a lot for him left to achieve at Camp Nou.

The 26-year-old has scored 25 league goals this season but there are indications that all is not well as he has struggled for the best part of a year with various knocks and niggles. His output on the field has noticeably decreased and the fact that Barca is enduring a torrid season is partly due to the fact that Messi has not been at his very best. He endured derision for failing to cover the ground in the Barca’s Champions League loss to Atletico Madrid. Radomir Antic, the former Barca coach, suggested that Messi deliberately failed to keep up as a means of punishment to Tata Martino who fielded him out of position.

Messi remains behind only Cristiano Ronaldo as the best player in the world but there are reasons for Barca to contemplate selling.