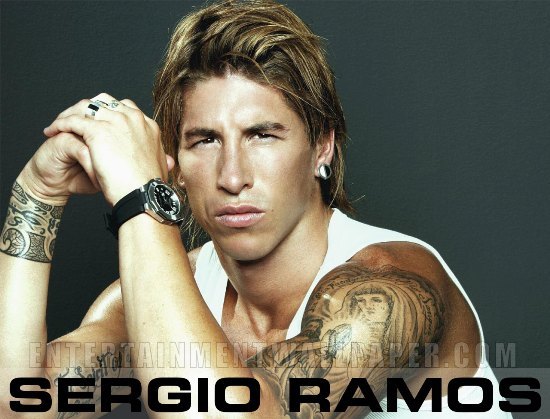 Discover some Sergio Romas’ tattoos and their meanings

The  Spaniard defender of Real Madrid has been tattooed on numerous occasions in recent years. Here is the complete list of all works of art featured on his body.
Sergio Ramos uses her body to pay homage to his family, missing friends, to victims of attacks…

First tatoo: Sergio Ramos has back tattoo a ghoul smiling with a soccer ball, this drawing is the first in a long list!
First of all, a tribal sign was drawn on his wrist. This tattoo is the same as that of his brother René.
On the left arm, we find a representation of the Virgin Mary and a star of David as a tribute to Antonio Puerta, friend footballer who died in 2007.
On this same arm, Sergio Ramos is tattooed ‘JM VII P’, the initials of his parents José Maria and Paqui, VII is lucky charm fugures.
Always on the left arm, the phrases “I will never forget you” (Elvish language ) and “Lies in the memory of those alive”  are written.
Sergio Ramos has found the place to get tattooed the dates 9-11 and 3-11, which correspond to the attacks in New York and Madrid
The other arm of the world champion has not been forgotten: we found indeed the phrase “The spirit of those dead”  . Above on his shoulder, Sergio made tattooing a Crown, a fatman with an eye hand. Near these tattoos we find a key, a cross, a key of soil, a Pocket Watch, and the Tower of the Giralda of Seville.
Sergio Ramos also has a Chinese character meaning ‘Wolf’ behind the ear.
The hands of the Real Madrid ‘star have not been forgotten: his mother Paqui’s first name and the nickname of his father Rubio were engraved. On the major of his left hand, the initials ‘M.R.S’ are present. They correspond to the names of his brother René and his sister Miriam, as well as his first name Sergio. The names of his sister and brother are written in integer in the bottom of his back. Next   these names, we find the tattoos of the number 4, his number of Jersey, with three stars, one for each brother and sister.
A reproduction of the World Cup is present on his left calf.
Finally, an eagle is present on the muscle belly of the Defender.
Sergio Ramos has commissioned a new tattoo in this month of September 2013. The tattoo artist Rodrigo Galvez Miras, who has worked on the front right arm of the player of Real Madrid. 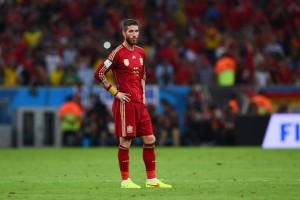 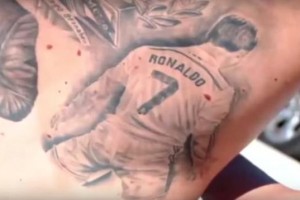 CR7 Fan Gets 5 Tattoos of Cristiano Ronaldo on His Back 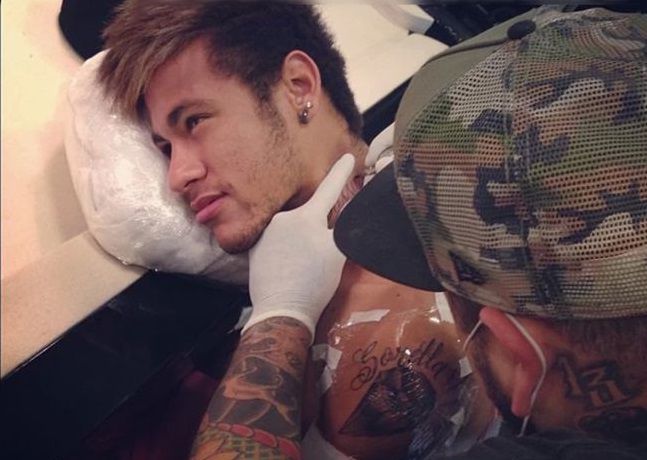