Cricket is the game considered with highest pedigree in India. It is followed by millions of people across the globe, with some people admiring it to the limit of frenziness. World cup 2015 is just a few days away and all teams are gearing up to taken on each other. Sharpening the weapons in their armory. Every cricketer wants to give an epitomizing performance to be rememebered for years to come. Even for that matter, media too has taken guards to cover the event. Preparations are on the cliimax. Both print and electronic journos are taking their positions, researching and making sure that everything culminates smoothly for the next one and a half month. Hindi media to English media, everyone has got high stakes to lure their audience. They have already started steering and feeding their viewers with the latest news. The rates of advertisements have also gone high subsequently. This way it is not only a important cup. Journalists from all over the world have started gathering in New Zealand and Australia where the coming world cup will be played. To serve the cricket enthusiasts the best possible and rarely available info, Cricket Hindi News from India is making every possible move to unearth them from every possible means.

In world cup 2015 people would witness the fight among players to get on top of each other, breaking old records and cliches, displaying their arc and talent on twenty two yards. As far as batting is concerned Sachin Tendulkar, the legendary cricketer holds a record of highest number of runs in world cup. He played 45 matches in 6 world cups and scored 2278 runs, which is a record and likely to remain unbreakable in this upcoming tournament as well. Although many players will have a chance to edge past the barrier of thousand runs, among them are Sri Lanka’s two super star batsmen and former skippers Kumar Sangkkara and Mahela Jayawardane. Kumar has got 991 runs in his 30 outings in world cups, including one ton and seven half centuries, where as Mahela in his four world cups and 33 matches has scored 975 runs with an average of 37.50. He would surely like to improve on his scoring rate, which is sulking low as per his standards. Though he has got three hundreds and five half centuries under his belt. One more batsman who is in the contention of being the player of the tournament is AB De veliers, who recently gave an impression of his prowess with his gutsy and bombarding inning of 149 on just 44 balls. He created history by scoring 31 balls century, hitting the West Indies’s bowling to the fence back and again. This way he grabbed all the eye balls. He has scored 725 runs in just 15 matches of world cup with an amazing average of 51.78. With his explicit hitting, he can prove to be a lethal threat to all his opponents. De Veliers has got 3 centuries and as many half centuries in his small stint, which is enough to show, how destructive he can be. 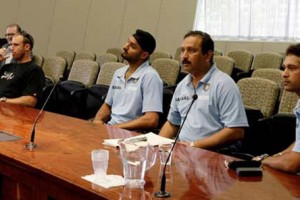