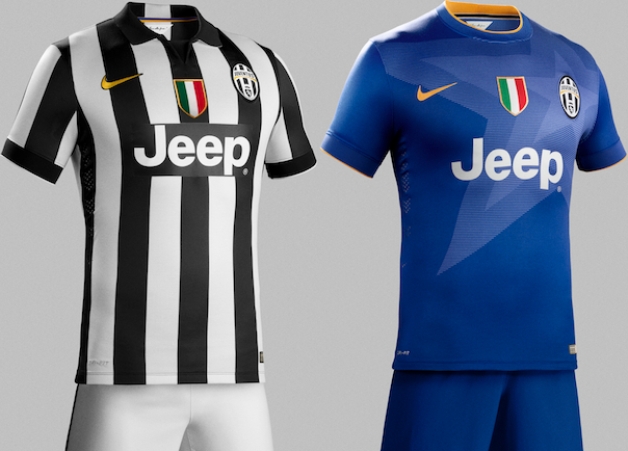 Nike officially launched the new Juventus 2014-2015 Home and Away jerseys. The 2014-15 Juventus Kits will be the last Juventus kits made by Nike for now, as Juventus signed a shirt supplier deal with Adidas from the 2015-16 season last year.

As Juventus won its third consecutive Serie A title, the Serie A winners badge was added in the center above the Jeep logo.

The Juventus 2014-2015 Home Jersey features the traditional black/white-striped look with 5 black and 4 white stripes on the front. The sleeves also have stripes on them.

The Shirt has black sleeve cuffs with a white trim at the end, and features a black flat collar. As this picture shows the authentic version of the new Juve 14-15 Kit, we can see the new Nike laserholes on both sides as well as golden Nike Authentic badge at the lower left side.

Inside the back of the neck is a yellow and blue tape to represent the royal colours of Turin and the club’s traditional away colors. Below this is a white pennant tab with the message: “Fino alla fine” (Until the end).White shorts and socks complete the new Juventus 2014-15 Home Kit.

The new Juventus 2014-2015 Away Shirt features Turin’s royal colors blue with yellow accents on the collar and the sleeve cuffs. The main eye-catcher of the new Juventus 14-15 Away Shirt is the big star design on the front, consisting of differently-sized stars positioned around the Juventus crest.

The new Away Shorts and Socks are blue to create an all-blue look.