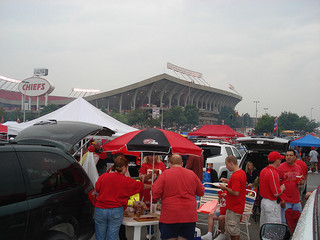 What is it about American tailgating that makes it so popular? Is it grilling outdoors? Is it the excitement of waiting for a long-anticipated football game? Is it the alcohol?

Arguably, it’s a combination of all three of these things since eating, drinking, and sports are the American past-time of choice for many. All of these things sound appealing, and in fact most sports fans would enjoy eating and drinking before any event. So what is it about tailgating that makes it sound so particularly “American?”

American tailgating has been an institution in sports-culture since probably the first colonial man watched his neighbors throw a ball back and forth while eating jerky.

Recently, however, parallels have started being drawn between American football tailgating and the British equivalent of pub-crawling before a soccer match.

There are quite a few similarities but also a couple of differences between these two pregame rituals.

What are the similarities between the American and the British customs? Other than an obsessive passion for sports…

1. Meat. Both events involve consuming large amounts of meat-based finger foods. Sure in America it’s wings or burgers and in the UK it’s more pig snacks or fish and chips, but the important unifying theme is meat. Lots of meat.

2. Drink. Both events also include drinking in some capacity. Drinking before, during, and after a sports match is a common theme across humanity, and you’d be hard-pressed to find a culture that didn’t enjoy that sort of social activity on the whole.

3. Friends. Even if you didn’t have friends when going to a tailgate or a pub-crawl, you’d probably have plenty coming out on the other side. Eating, drinking, and being merry before an anticipated event is a great bonding experience, and so is dishing on the other team when its fans are in earshot.

While there are several factors that unite sports fans on both sides of the pond, there are some definite differences in the traditions.

1. Location. The most readily-noticeable difference between tailgating and the pub-crawl is where they both take place. The pre-soccer game pub-crawl takes place in, of course, a pub. Tailgating, however, takes place outdoors, in the parking lot of a major football stadium.

There are, of course, potential reasons as to why these fundamental changes in locale are the way that they are. There are people who have postulated that the fickleness of English weather prevents fans from camping outside and setting up shop.

Of course, another reason could be that most fans of soccer in the UK don’t usually drive to events as they would be required to drive home rather intoxicated after the fact. Even if they did drive to the event, few citizens of Britain have vehicles big enough to drag tents, grills, and entire coolers to a game. That is in contrast to America where access to these sorts of military-grade vehicles is more available.

2. Activities. Because of the respective locations of these events, the ways to pass time are drastically different as well. True, in a pub the patrons could play a riveting game of darts, but every tailgater knows how to engage in outdoor activities.

Throwing a football is a popular pastime since the fans have football on the mind. But perhaps the most popular game is cornhole (check this company for examples of cornhole boards and bags). Truthfully, cornhole tends to be a little safer for the vehicles in the parking lot since bean bags rarely break side mirrors. Plus, all the equipment is easily transportable and totally customizable.

3. Food Preparation. It’s a staple of American tailgating to see the fan wearing face paint also holding a spatula and wearing an apron. For tailgaters, it’s important to grill your own food for friends and family. Besides, you’ve been looking for an excuse to try out the new grill you got for your birthday.

For the pub-crawler, however, it’s the pubs that provide the food. Why would you try to schlepp your own equipment to and from a game when you can get pub-quality food at your convenience?

Of course some soccer fans in the UK have been discovering the art of food trucks outside the stadium in recent years. Whenever a big match plays at a stadium like Wembley, food trucks set up in the parking lot and offer a variety of foods, both domestic and American. Since these trucks have been seeing huge lines and financial success, it may be that food trucks could be the answer for UK soccer’s take on tailgating.

At the end of the day, pub-crawlers and tailgaters have a lot in common, from enjoying the social activity that is sports matches to the desire to eat and drink before a match. Just because American tailgaters enjoy cornhole and UK pub-crawlers like to eat indoors doesn’t mean that the two groups of people don’t have considerable overlap in other areas of pregame festivities.

In reality, both of these groups are two sides of the same coin.