In a competition that has been thrilling audiences across the globe for over 23 years; we now take a look at five of the greatest finals in the history of the Champions League.

Probably the most famous three minutes of injury-time in the history of the modern game as Manchester United broke German hearts to claim Europe’s top club prize for the first time since 1968. Both sides at the time were chasing domestic and European trebles and when Mario Basler put the Bavarian side ahead after just six minutes, it looked as though Bayern were on course to fulfil their dream. Their opponents that night however, had made overcoming adversity their specialist subject during the 1998-99 season and they saved their best for last as two quick fire goals from substitutes Teddy Sheringham and Ole Gunnar Solskjær in time added on at the end of the match, sent the trophy back to Old Trafford.

At half-time in the 2005 final, the game was over with Milan leading Liverpool 3-0. It was just a matter of going through the formalities in the second-half before the Italians were crowned kings of Europe again. What happened in that Milan dressing room during the interval has never been fully revealed but stories of players already toasting success have been prominent ever since. When Liverpool captain Steven Gerrard pulled a goal back on 54 minutes which was quickly followed by a second from Vladimír Šmicer two minutes later, the Italians capitulated and just four minutes after that, Spanish midfielder Xabi Alonso levelled things after he converted the rebound of his own saved penalty. From then on there was only going to be one winner as the game went to the dreaded penalty shootout. Milan missed their first two (one from Andrea Pirlo) Liverpool converted their opening spot-kicks and when Ukraine striker Andriy Shevchenko saw his attempt saved by Jerzy Dudek in the Liverpool goal, the Merseysiders had completed the most dramatic turnaround ever witnessed in a major final.

A game that will be specifically remembered for one outstanding moment of skill by a player who at the time was the best in the world, the 2002 Champions League Final had witnessed two goals within the opening 15 minutes, as hot favourites Real Madrid found themselves all square with German side Bayer Leverkusen. On the stroke of half-time, Brazilian full-back Roberto Carlos took a corner and floated the ball out to Zinedine Zidane on the edge of the Leverkusen area. The Frenchman then despatched a volley of such finesse, that the 50,000 crowd inside Hampden almost fell silent, scarcely able to believe what had just happened – the greatest goal in Champions League history.

Italian giants Juventus went into the 1997 final as clear favourites to retain the trophy they had won 12 months earlier against Ajax. Their opposition in Munich, Borussia Dortmund only had the advantage of playing in their own country as something to cling onto such was the belief that the Turin side would return home with the trophy. At half-time, the doubters were left stunned as two goals from striker Karl-Heinz Riedle gave the underdogs a 2-0 lead. When the legendary Alessandro Del Piero (on as a second-half substitute) pulled one back for Juventus it seemed inevitable that the Old Lady would at least take the match into extra-time but when Dortmund substitute Lars Ricken, scored an unlikely third for the Germans having only been on the field for 16 seconds, the team from North Rhine-Westphalia had produced one of the biggest upsets in the competition’s history.

It was fitting that the team that had won the first five editions of the old European Cup should be the first club to win European club football’s biggest prize on 10 occasions. But it could have been so different in the 2014 final, when city rivals Atlético led until the 93rd minute of the game before Spanish central defender Sergio Ramos equalised with a late, late header. Exhausted and demoralised, Los Colchoneros wilted in the extra 30 minutes as goals from Gareth Bale, Marcelo and Cristiano Ronaldo finally gave Los Blancos “La Decima” their 10th title. 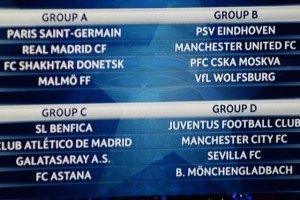